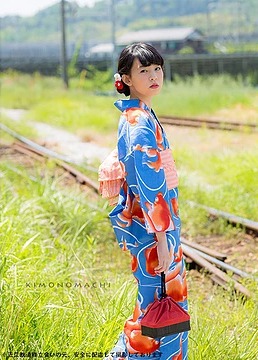 Juban (襦袢) is an inner wear worn in between a Kimono (着物) and an underwear. There are various opinions about the origin of the word Juban, and it’s said to be introduced from Arabian, Portuguese, or Indian. Same as vintage Kimono (着物), antique Juban has a lot of varieties from chic ones to funny ones.

For formal Kimono, wearing white Eri (襟, a collar which is a part of Juban) is the invariable standard. However, there is no such rule for casual Kimono. Choosing Eri from various colors and patterns is a big fun part of wearing Kimono.

The interesting thing is that Juban falls into the underwear category. Among the traditional costumes all over the world, showing a part of underwear in the formal attire is quite a rare tradition.

Anyways, Juban is truly important for the beautiful shape, and the key is the curve of the Eri. In the Edo (江戸) era, people started to dress Kimono with Eri widely pulled down on the back. As women’s hair style became more complicated, people lowered the curve of the Eri in order to avoid the hair oil to smear it.

The world of Juban is also very interesting.

Click here to see a Blog by a Former MAIKO “Do You Know?”.